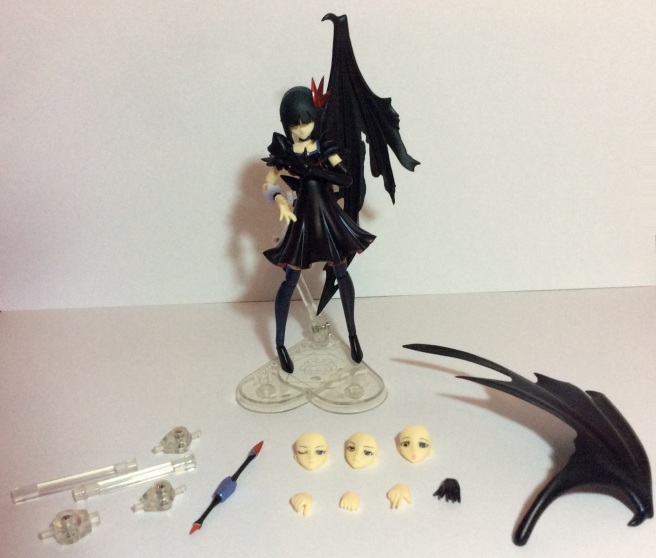 In all seriousness, I adore this figure already. She has her flaws, but it’s just so awesome to have a Precure villain and her design is great, the contrast in shape and line and colour (of course) between other Precure is very glaring. Even her Dark Pact is rather stretched and sharp. 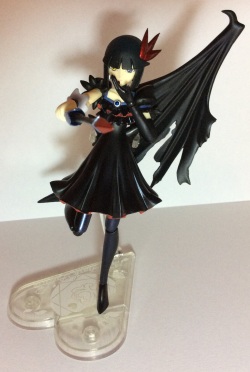 First of all, articulation. Her articulation is good, especially for a earlier Figuarts, their articulation has definitely improved with each release! It’s limited by a lack of pull down hip and arm ball joints (which hasn’t all that much effect on recreating the characters poses in all honesty. Dark Precure is rather rigid in her poses anyway) but most of all by her skirt, though likely they couldn’t have got the same shape or colour with a softer plastic, its shape is quite limiting as far as leg articulation is concerned. She’ll never do a high kick! Also, sadly she has no waist rotation. 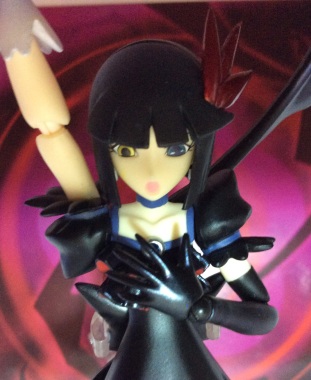 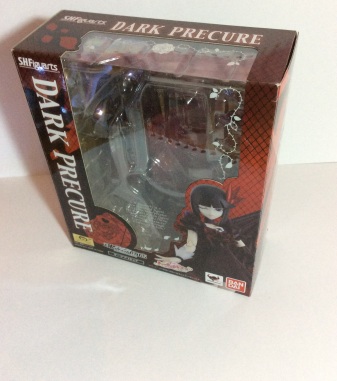 Accessories aren’t amazing but I’m very satisfied nonetheless. Two wing variants, one tattered and torn and one spread and a dark pact but also significantly 4 faceplates! A joy to behold – I’m really happy with the expressions, they’re probably one of my favourite parts of her design, that heterochromia is so cool!

Now, I’m going to refer to her AmiAmi second hand rating. Her box was rated B. I was shocked therefore by the virtually brand new condition it was in. As far as Dark Precure herself is concerned her condition is shockingly good. She was rated C but I’ve only found two minor flaws in her condition, it seems Japanese collectors are very finickity about quality. Those afore mentioned flaws are a miniscule spot of yellow paint (which I think I’ll easily be able to remove pretty easily) and a small scuff on the matte paint on her hair.

I really like Dark Precure! She is a lot  of fun to pose with my other magical girls, and I look forward to her looking disdainfully at my other figures in the dolls house, so I’ll post pictures of it soon! Well, thank you for reading. Hopefully I’ll be reviewing Fireball Drossel soon! Goodbye!